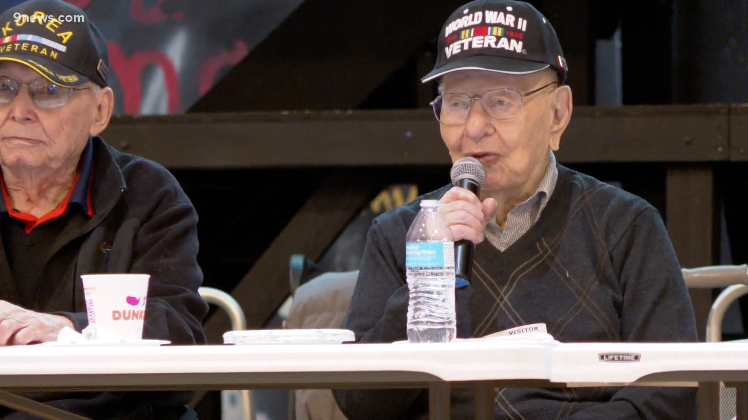 “We have had a lot of experiences in our time and we do like to share,” 100-year-old WWII veteran Fran Shedd said.

Shedd was an engineering officer on a landing ship in the South Pacific. He was joined by six other panelists, including two other WWII veterans, a Korean war veteran, two women, and a Japanese-American man who was imprisoned at an internment camp.

All of the panelists are from the Clermont Park retirement community, just a few miles from the school.

“They are a primary source,” senior student Samir Mongar said. “They are living documents.”

Sophomore student Sora Robinson said she was most interested in learning from 87-year-old Hank Wyeno, who was interred at Camp Amache.

“Being able to be face-to-face with someone and talk about it, you get to know stuff that you wouldn’t be able to know from the books,” she said.

Students asked all kinds of questions, like “What was your favorite comfort food during wartime?”

Others wanted to know what it was like for a wife at home whose husband was fighting a war.

“It was awful. It really was,” Elaine Westblade said. “There was worry in mind all the time whether he was going to come home or not, because since he was in the field artillery he was really in the midst of the fighting.”

The students said they were amazed.

“I kind of learned how everything, in a way, impacted them, with PTSD, trauma, things like that,” sophomore student Joe Keagy said.

Even though it was 75 years ago, Shedd recalls his experiences like they were yesterday.

“I’ve never seen so many ships in all my life. They just went from one horizon to the next. Just fantastic,” Shedd said.

His wish for these students, along with the rest of this panel, is that they get their education.

“Continue to try to understand what’s going on and not get diverted from a good target,” he said.

“They are still healthy, happy, and they’re still living a long age,” Mongar said. “So I think the inspiration is how much they have gone through and where they are now.”